John Rocco's picture book is beautiful!  They are so wonderful that Rocco uses mostly the pictures to tell this story.  It is about a family who is too busy to play a game with the youngest boy.  Then, the lights go out throughout the city.  The family finds that the darkened night isn't so black after all.  Enjoy this story on your own busy summer night!
Posted by MrsBsplacetobe at 4:42 PM No comments:

Email ThisBlogThis!Share to TwitterShare to FacebookShare to Pinterest
Labels: picturebook

Connor Sullivan is a hot shot baseball player in middle school.  His team, the Orioles, look to him to bring the team to victory.  Connor usually feels at home on a baseball field, but after his dad lost his job Connor feels stressed out. He feels he is letting down his team when he starts making errors. Conner gets into hot water when he starts to throw tantrums on the field.  Read to find out how Connor handles the stress at home and on the field.
Posted by MrsBsplacetobe at 4:24 PM No comments:

Email ThisBlogThis!Share to TwitterShare to FacebookShare to Pinterest
Labels: realisticfiction

After looking at over 30 informational text books on volcanoes, these are my favorites.  I looked for great pictures, good content- ( a must if we want children to learn something from them), understandable diagrams, and unique!  Here's the list- happy learning!

Posted by MrsBsplacetobe at 8:24 AM No comments:

Email ThisBlogThis!Share to TwitterShare to FacebookShare to Pinterest
Labels: informationtext

Lisi Harrison's Monster High is a great blend of fantasy fiction and an emotionally charged story of finding yourself.  Her characters Frankie and Melody have to navigate the terrors of high school as they learn to find pride in their monstrous appearances.  Harrison's close ties to MTV allows her to write using the foreign language of the materialistic youth.  Reading this fun story made me repeatedly laugh.  The characters, whether they are monsters or not, are very familiar character to any high school.  I can't wait to read Harrison's next book, Monster High, the Ghoul Next Door.
Posted by MrsBsplacetobe at 6:50 PM No comments:

Fablehaven, #5, Keys to the Demon Prison, by Brandon Mull


In Brandon Mull's final book, Keys to the Demon Prison, Seth and Kendra's adventures come to a conclusion.  Normally, I like to give a partial summary to tell you what the book is about.  Unfortunately, I don't think I can do this without giving away Mull's complicated conclusion to his five book series.  Instead, I will give my review of this final book.  I think one of the pitfalls to ending a series, is the author tends to throw everything into the story including the kitchen sink.  Mull falls into this trap.  He has multiple characters that have developed over the previous four books.  As the characters separate to try to prevent the Demon King from escaping the prison, Mull has to tell numerous side stories.  In parts, I found myself losing attention.  This 588 page book is about 100 pages too long in my opinion.
I liked the way Seth and Kendra finally come into their powers and together make a difference in the events.  Seth really becomes a favorite for me. He continues to make childish mistakes, but shows how wrongs can be set right.
I am not sure I would search out this book- except for it shows how the fight of good and evil ends.  In the end, I find myself wanting a few more books to see how Seth and Kendra grow into their roles in the world of fantasy they live in.
Posted by MrsBsplacetobe at 4:16 PM No comments:

Email ThisBlogThis!Share to TwitterShare to FacebookShare to Pinterest
Labels: Fantasy

Fablehaven, Secrets of the Dragon Sanctuary, by Brandon Mull

In the fourth installment of Brandon Mull's fantasty series, we find his young heroes fighting against the mightiest foes in mythology.  Kendra is still heavily guarded due to her fairykind status.  She feels safe as she roams around her hometown.  If there was trouble, her trusted allies- Tanu, Warren, and Coulter would come to her rescue.  Meanwhile, Seth grows excited about the upcoming Christmas break.  Just as we are comforted knowing Kendra and Seth are back in the "real" world and at peace, Mull reminds us this is a story of action and nothing is as it seems.  Kendra starts to act odd. Seth is irked that his Coco Krispies are all gone, but thinks his sister may be finally lighting up.  He is wrong and ends up mourning for his dead sister.  In his grief, Seth allows Grandpa Sorenson to take him back to Fablehaven.  Once there, Seth and the others stumble upon a plan the corrupt Sphinx has hatched to retrieve the hidden key at the secret dragon sanctuary, Wyrmroost.  Seth finds that he is also gifted by the powerful creatures of Fablehaven.  When he pulled the nail to save the day (in book 2), he was gifted with powers of the dark.  The evil demon Graulas dubed him an ally of the night.  A shadow charme. He now can understand languages of dark beings, walk among shadows unseen, and still is not effected by magical fear.  Seth continues to try to prove his improved maturity to Grandpa.  Seth desperately wants to go with the team to Wyrmroost, yet no one considers him valuable to the mission.  In all things Seth, he sneaks into a hidden compartment and stows away.
In this book, Mull continues to weave deception and trust into his plot.  Who can the children trust?  How do they own their own talents?  How are they going to defeat the evil Sphinx?  Will they survive? Mull answers some of these questions and sets the ground work for the conclusions in book 5.  Enjoy!
Posted by MrsBsplacetobe at 11:20 AM No comments: 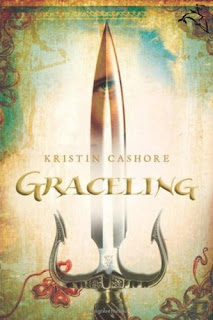 What an exciting debut book!  I am fascinated by stories with strong heroines.  This story delivered a strong, ferocious teen who challenges herself at every turn.  Katsa has a Grace- she is lethal.  At a time when most children are surrounded in love and gentleness, Katsa is separated from humanity.  She is an outsider who is always watched and feared.
Katsa's Grace is controlled by her uncle, King Randa.  He is a power hungry king who uses his deadly niece to maim and kill his enemies.  Katsa is so separated from her humanity, that she believes what others believe of her.  She is animalistic and not to be trusted to interact with others.  Yet, her Uncle doesn't control all of her actions.
The young Graceling tries to balance her gruesome acts by restoring the wrongs in her kingdom.  She creates the Council to help the innocents escape the petty war-mongering of the 7 kings of the kingdom.
The book opens with Katsa on a dangerous, dark mission.  She rescues an old man.  The readers are unsure of her motives, but are astonished at her skill.  She moves swiftly and catlike.  She is able to demolish all of an enemies guard without raising a single alarm.  Kristin Cashore surprises the reader because Katsa does so without killing a single one of them.  We know she could kill any of them easily, yet she demands the guards will not forfeit their lives.

Cashore does a great job to develop her heroine.  Katsa struggles emotionally with the age old question of who she is, what she wants, her struggles to fit in.  She may be Graced, but she struggles with emotions that an ungraced teen can relate to.
When Cashore introduces Prince Greening, he is the only person who can challenge Katsa.  He is also a Graceling.  He understands her problems, but also understands how to interact in the world around him.  His Grace in fighting provides him enough skill to keep him alive.  Without fear of Katsa’s killing Grace, he is able to force humanity onto her.  This makes her incredibly conflicted and confused.
The Prince is mysterious in his own right.  He shrugs off titles and prefers to be known as Po.  When he looks at Katsa, he seems to look into her.  He senses her confusion, anger, and curiosity.  As she relates to him through her physicality, he relates to her with his easy communication.
I don't want to spoil any of the plot or story for you, so I will not give away any more of the delicious events.  This is an adventure story that will capture your heart.  I saw similarities to Katsa and Po in some of my other favorite literary characters.  She is strong and capable at defending herself, like Katniss in Hunger Games.  Katas also struggles with what she is and what she has done like Jasper in Twilight.  I wouldn't say Cashore stole or copied these characters.  They just seemed so familiar to me.  I understood so much more of whom they were and possible choices they would take.  Great job for a debut book!